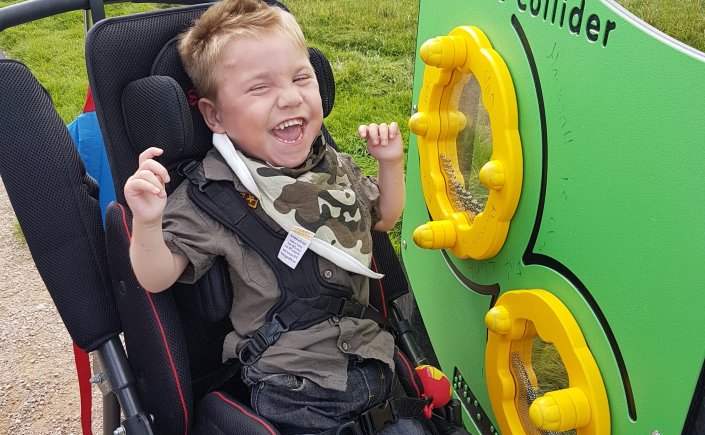 Looking outside it is very clear, that unfortunately Summer is now well and truly over. The early dark evenings have arrived, I have swapped slip on shoes for boots. Ice cold drinks for Steamy Hot Chocolate, BUT before we enter the full swing of the Autmnal months I thought i had better get in there quick with a blog that updated you all on all things inclusive play that I have been working on and as a family we have been enjoying through the Summer months.

As a family we are always looking at ways to make sure Owen is fully included in every day family life as possible.  We are just like any other ‘normal’  family (hate the word Normal… whose normal anyway) We love Family days out together, Be it to The Zoo, Seaside or just to one of our Local Parks.

I have always felt lucky living in my home town of Watford. Many of our parks are of a high standard. Growing up here and also now as a Mother of four I have spent more hours than I could even count having fun in parks.

Owen is a massive Thrill seeker, his favourite piece of equipment at our local park is the Nest Swing. You should hear his squeals of delight mixed with his proper belly laugh as you push him to go very high and very fast. (Much to the worry of his Twin sister Florence) The unfortunate thing is, that this is very popular piece of equipment especially with the older children, so queues often form while Owen is having his much loved turn. Once Owen has had his ‘go’ There is not much else for Owen to do.

As you may or may not be aware, Cassiobury park has undergone a big £6.5million restoration project.

The project included;
*Renovating the lovely Cha Cha Cha Café, We have lots of lovely times here. I fondly remember bringing Lilly each week here for her Hartbeeps Music and Movement Class. Also who doesn’t love a Latte while watching there kids play.

*Moving a bandstand from the top of the town centre back to it original position in the park.

* Renovating the Paddling Pools and building a great big Hub Building which now will include a Changing Places Toilet.

* Adding some new Inclusive play equipment to the main park.

Starting from the early stages of the planning and building more than a year ago. I have constantly been in contact with Watford Borough Council to raise awareness of the need for ALL parks to become Fully Inclusive. My first response prompotted me to believe much work was needed, Watford Council replied stating that  “ALL Watford Parks are already Fully Accessible”

Now seems to perfect time to explain the important difference between Fully Accessible and Fully Inclusive, As the two are totally different things.

According to Landscape Structures, a leading manufacture of inclusive playground equipment, an inclusive playground “… can offer many opportunities for children to further develop physical, cognitive, sensory and social skills. An Inclusive design includes a balance of play experiences to build all these skills.”

So you can see why I believe a Fully Inclusive Playground is much more important than just being accessible.

Things didn’t get much better very quickly, During the works on the top park I found the devastated sight that Watford Council had ripped out all the current inclusive play equipment including a Wheelchair roundabout  and replaced with nothing Inclusive at all.

Below is an extract from a previous blog detailing what I found.

After an array of sent emails along with lots of research and information, I began to feel rather more positive when The Section Head / Parks, for Open Spaces and Projects at Watford Council got back in contact with me. I felt he really took on board what I had to say.  He really looked in detail to all the points I had made and read all the research and information I had sent. He then came up with a number of suggestions regarding Inclusive Play in Watford. 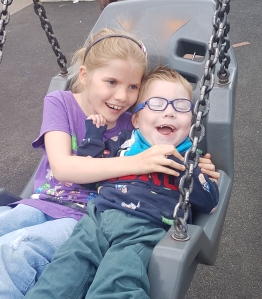 “… There may be an opportunity to refresh the play area
here and seek funding to expand the offer here. This
could include a wheelchair swing unit here…”

Which has well a truly happened… all apart from the wheelchair swing due to the overwhelming price of such an item. They have agreed if money does become available or money can be raised they would be very keen to add the Wheelchair Swing at a later date.

Below is a link to their website all about Playgrounds.  It also gives you an email address for those locally who also want to see some changes or have some ideas.

Also with regard to the new splash pools. 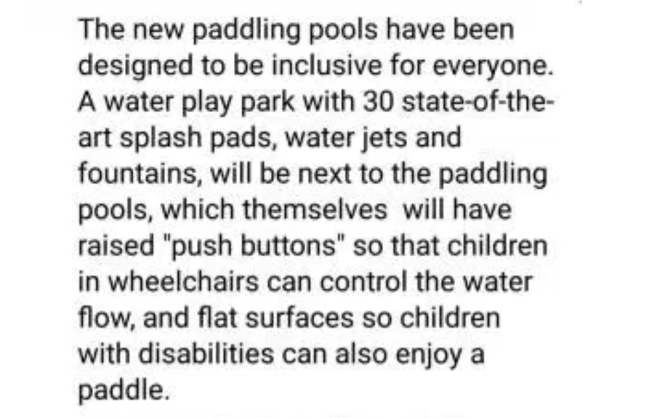 As you can see we very much enjoyed these new facilities over the summer. 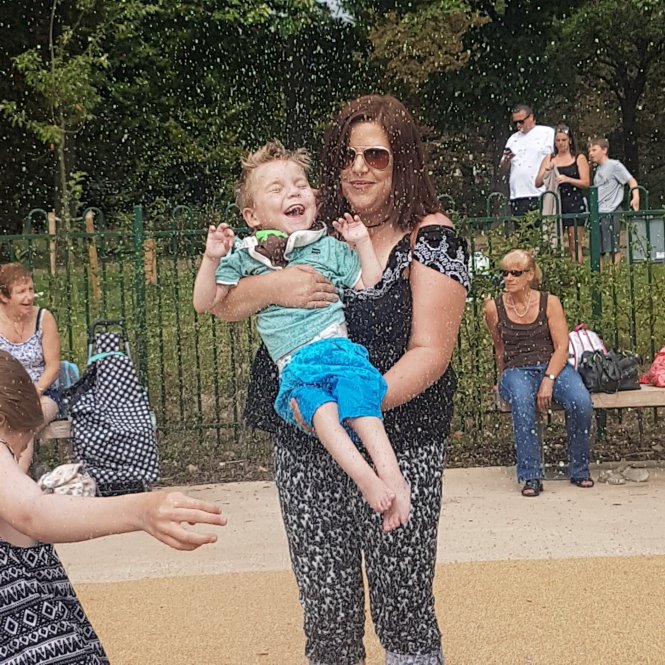 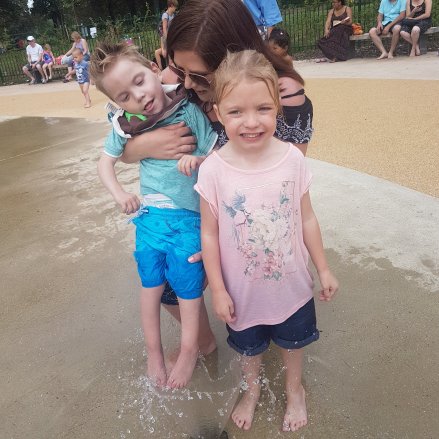 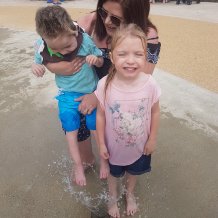 I still haven’t worked out the best way to enjoy the splash park without his wheelchair seat getting soaked. So it was a back breaking day for me, but worth it to be able to see all four children having fun.

We also did use the new Changing Place, unfortunately there was trouble with lighting it only flashed on for a few seconds at a time. The pool attendant couldn’t be more helpful and apologetic and stood by the door to keep it open to give me some light and to give Owen some privacy from passers by.  I think we will put that experience down to pure bad luck. I have personally had so much great feedback from other users of the Changing Places Toilet there.

Nice view behind a bin

Unfortunately not all Watford Council events were as successful. After a Consultant appointment I decided it would be fun to bring Owen and the girls to the temporary big screen on the urban beach at the top of town, it was only a few minutes away from where we had been. The unfortunate part this year, was access was to the beach in a wheelchair was not possible. I did try lift Owen out of his chair and sitting him with me, but then we got a bit stuck trying to get him and myself back out of the deckchair. Owen was then due his feed which he needs to sit in his wheelchair for. It was a shame as Cbeebies was on the big screen and I knew Owen would of quite happily sat there watching Teletubbies during his feed whilst Lilly and Florence continued to play happily in the sand. After a little while of bad views, Owen and myself got fed up and had to cut short the girls time on the beach.

A picture of the girls enjoying the beach and one of Owen in the dedicated Wheelchair Space too far back and off the beach.  I am now worried the ice skating event they hold in the same place annually will no longer be wheelchair accessible as it was last year, we will wait and see.

Previously in another blog I mentioned about Watford Councils controversial plans to knock down two adventure playgrounds and club houses to make way for new adventurous play parks. My local one was a big disappointment, All was built was large climbing frame and slide. My girls were far from impressed. They have had no real interest to go to that one despite being only 2 minutes from our house. The girls also mentioned as there is nothing there for Owen they would rather go to the other park a few more minutes way where there is stuff for Owen to play on. 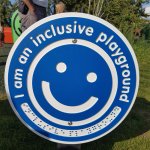 The other site where the second new Adventurous Play Park has been built is close to my Mothers house. After driving pass it a couple of times I had to admit it looked pretty impressive. I had also been told my the Council this new park had new Inclusive Play Equipment, so on my next visit to my Mothers we all decided to take a walk up there to check it out. It was a lovely warm day and the children hurried ahead in anticipation. As soon as we entered we were met by a little Inclusive Play area, which was great (Apart from a few flaws that i will come on to later) 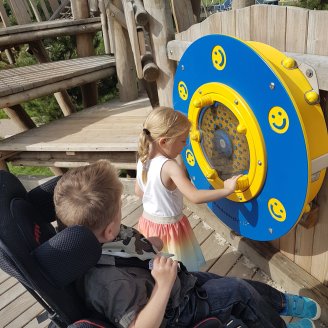 What I loved best was that the Inclusive Play equipment was also scattered about the various paths that we all enjoyed exploring. We even had an “I’m a Celebrity Get Me Out Of Here” moment as I dared to push Owen across the “Wibbly-Wobbly” bridge, Owen found the bumpy ride more than hilarious as we chased Florence across.

Now the flaw I mentioned earlier. There were  two pieces of equipment that were designed for children in wheelchairs but just did not work. Owen could just not reach the music beaters to play each of the music boxes. One reason being that the chain they were on was too short and the second was because they were hanging upside down, the angle you would need to position them so the beaters was impossible for Owen and his range of arm movement. This was very frustrating. We took photos in view to email both the council and play equipment provided later.

The equipment was installed by a fantastic company called Inclusive Play .http://www.inclusiveplay.com/ I posted the picture on there Facebook page and they very swift to reply apologising and asking for my email address and for more details. I sent all the details plus photos. Quite soon after I had a reply that that were going back to the designers and see if any thing could be done. A few weeks after that I received a really positive email to say they have come with an alternative design to fix the beaters in a more accessible position and from now on this is how they will be manufactured. Inclusive Play have also said they will retro fit the ones at the park i visited.

Above is a picture of the new design.

All I want is places, companies and events to do is show that Owen is welcome. Owen deserves the same chances and opportunities as any other child.

All Owen wants to do is what other five year olds do… and that’s PLAY!!!

7 thoughts on “Let Me Play – A Summer Of Inclusive Fun” 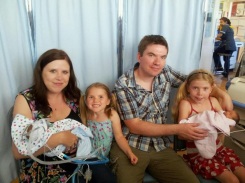